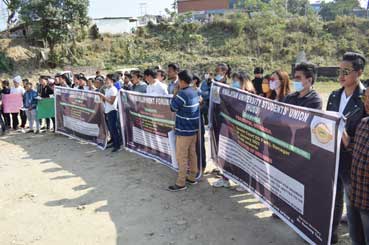 Highlighting the deplorable condition of the Arunachal Bhavean, APSUM president Tapo Riang informed that the union has repeatedly submitted representations, along with documentary and pictorial evidence of the problems and issues of the bhavan in the last 10 months to the state government and also the APIDFC, “but no action has been initiated.”

“The lone Arunachal Bhavan in Mumbai, which caters to the accommodation of visitors from the state for medical treatment, especially cancer patients, is in shambles and is unfit for living, but our people are compelled to use it,” Riang said, adding: “It is a shame that a student union has to repeatedly pursue the government for its upkeep and functioning.”

“We had also filed an RTI to the APIDFC, seeking a copy of the MoU signed between the APIDFC and the City and Industrial Development Corporation, but they failed to produce the details,” he claimed.

He said that despite Chief Minister Pema Khandu and former chief minister Khaliko Pul personally visiting the bhavan, neither the functioning nor the condition of the bhavan has improved.

“It is unfortunate that we had to resort to a protest, seeking infrastructure improvement of the bhavan,” Riang said.

He further informed that the APSUM, with the support of the All India Arunachal Student Union Federation, would continue the democratic movement until its demands are fulfilled.