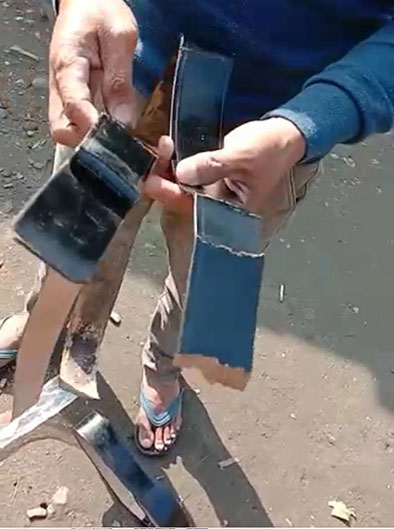 ITANAGAR, 23 Jan: A video purportedly showing an APP jawan displaying a fragile, paperboard belt and  saying that he is supposed to wear it on Republic Day is being widely circulated on social media.

“To wear it on 26 January, I took out the belt from the plastic and found that the belt is made of carton (paperboard),” the man claims in the video, adding that the belt was supplied by the police department.

Ever since the video went viral, there has been widespread criticism of poor quality items being allegedly supplied to APP personnel.

On being contacted, DGP RP Upadhyaya informed The Arunachal Times that an inquiry has been ordered to unearth the veracity of the video. The police chief further informed that, although the video’s source has not been verified, “the video is not from Itanagar.”

“Not able to identify so far which unit is this. Last time, the belts were procured in 2014 and a small amount in 2018,” the DGP said in a message.

Home Minister Bamang Felix, who is on a tour of his home constituency in Kurung Kumey district, said the department has ordered that the facts behind the video be verified. The home minister informed that he has asked the DGP to unearth whether or not the claim is true.

However, he also informed that procurement of small items has been decentralized to the superintendents of police in the districts.