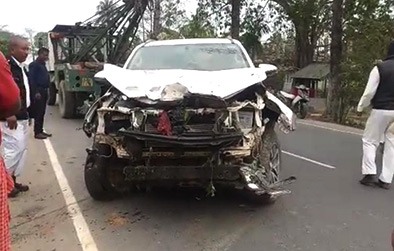 ITANAGAR, 9 Mar: Two persons in their mid 30s, identified as Mongol Shiv Boraik (35) and Biru Saura (36), were reportedly killed on the spot after a Toyota Fortuner, bearing registration number AR-05D-2023 from Arunachal allegedly collided with them.

The OC informed that a Fortuner SUV, bearing registration number AR-05D-2023 from Arunachal was found at the site of the incident.

Ahmed said that the driver of the SUV along with the owner had already fled from the spot by the time the police reached there. A case has been registered at the Chariduar police station, and the search for both the accused is underway, Ahmed said.

Ahmed informed that postmortem was done on the deceased, and the bodies were then handed over to their families.

“The SUV has been lifted from the spot and is kept in the police station as of now. At the same time, we have also tried to gather details from the police counterpart in Arunachal Pradesh, so that the accused is arrested at the earliest,” he added.

The OC said that the police are making all efforts to identify both and accordingly make arrests. “As of now, we know that there were two persons in the SUV, and the vehicle is pasted with a ZPC plate above the actual number plate of the vehicle,” he said.