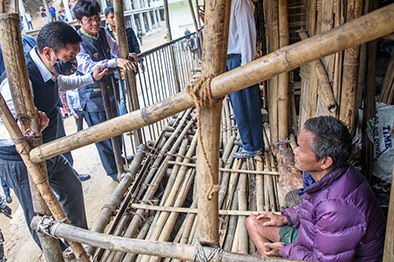 Situated in Senki View, Deepak Nabam Living Home – a halfway home for the mentally disabled – houses mentally disturbed people, orphans, the destitute, old people, and addicts. It is run by Deepak Nabam and his wife Protima Nabam, without any assistance from the government or any organization.

“It was in January this year – my second son’s birthday. I asked one of my personal staff to look out for a destitute home or an orphanage in the state capital doing commendable job and offer some amount for a grand meal for the inmates. He selected Deepak Nabam Living Home,” Khandu recounted.

He said his personal staff brought back a few video clips from the institute and shared it with him.

“What I saw shook my conscience. I never knew someone was doing such great service to humanity. I saw that there were many inmates but the living condition and the infrastructure was very poor. Literally, it broke my heart,” Khandu said.

He then enquired and was shocked to know that the halfway home received no funds or assistance from any central or state government schemes.

“I then decided to visit the home. Our government is committed to the welfare of the destitute, orphans, old people and addicts equally, just like other citizens,” Khandu said.

Going around the halfway home and interacting with the inmates, Khandu lauded Nabam, his wife and the volunteers for their yeoman services. He, though, felt the urgency to improve the home’s infrastructure with proper facilities.

“Creating infrastructure is not a big deal for the government, but what matters is upkeep, proper use and sustenance of the created infrastructure,” he said.

Khandu assured to fulfill all the requirements of the halfway home, like a common kitchen, a male ward, flood protection, security fencing, drainage, etc, and expressed confidence that these assets would be put to good use by Nabam.

He said many such NGOs are doing great service to humanity across the state and require handholding by the government. He said that, in the upcoming e-Pragati meeting, he would direct all the deputy commissioners to submit the list of such NGOs, so that the government can come up with a mechanism to help them through the social justice, empowerment & tribal affairs (SJETA) department.

He informed that the state government would offer grants-in-aid to such NGOs, instead of the in-practice corpus fund. He claimed that the low interest rates of corpus funds offered by banks hardly benefit the NGOs concerned.

“Deepak Nabam is doing a great job but he alone cannot sustain. He has done to the limit of his personal resources. Now the government has to step in and all well-to-do citizens need to chip in. We throw huge amounts of money in politics; can’t we contribute a little to such NGOs?” Khandu said.

The chief minister along with SJETA Minister Alo Libang and officials inaugurated a newly constructed halfway home building, and flagged off an ambulance.

Established in 2015, Deepak Nabam Living Home has so far provided shelter to 1,500 inmates over the years. Many recovered or found a home and left. For 160 inmates, the home still is their only hope and shelter. (CM’s PR Cell)