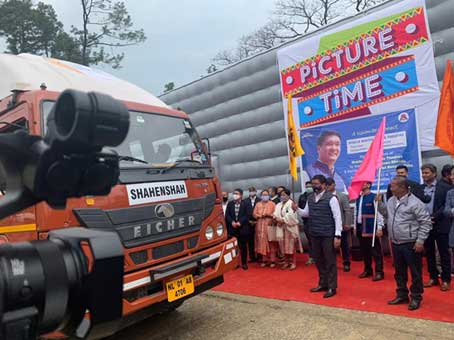 ITANAGAR, 11 Mar: In a bid to take art and entertainment to the people’s doorsteps in far-flung areas of Arunachal, Chief Minister Pema Khandu along with IPR Minister Bamang Felix on Thursday flagged off five mobile digital movie theatres of the information & public relations (IPR) department from the Dorjee Khandu Convention Centre here.

The mobile digital movie theatres are the first of their kind in the world, made in India by Delhi-based company Picture Time Pvt Ltd.

“The mobile digital theatres procured by the IPR department would be beneficial to people in terms of arts and entertainment in remote areas where there are no movie theatres,” said the CM. He also said that the government’s policies, especially in regards to education, could also be displayed through the theatres in remote areas.

The chief minister stated that the five mobile theatres is a pilot project. “If it is successful, the government will consider coming up with more such mobile theatres,” he said.

Felix informed that the mobile theatres could be used in multiple ways, be it information education campaigns or education and movie promotion in remote areas where there are no internet services. He informed that guidelines would be drafted to operate the theatres.

Chaudhary also informed that the theatres are equipped with a “magic box” with wifi and hotspot provision. “A student who is going for a coaching, they can download and study,” Chaudhary added. “This is not only mobile theatre but also a moving educationist,” he said.