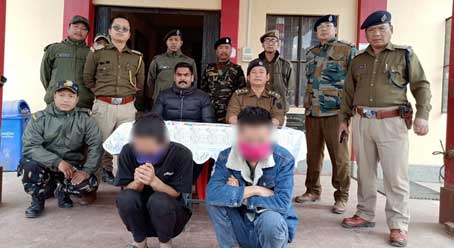 According to the police, a source informed that two suspected drug peddlers were seen near the SSB gate here.

Acting on the tip-off, SP Harsh Indora formed a police team led by SI Tania Uli and Constables T Toni, S Nokbi and C Pansa, who were on patrol, under the supervision of DSP Tasi Darang.

Subsequently, the team intercepted a scooter near the SSB gate and apprehended the duo along with the items.

A case (u/s-22 (a)/27 (b) NDPS Act) has been registered at the Ziro police station and the case has been endorsed to SI Inya Tato for further investigation.

Indora stated that strong legal action would be taken against drug peddlers.

He appealed to the civil society and student bodies to come forward and fight against the menace of drugs.