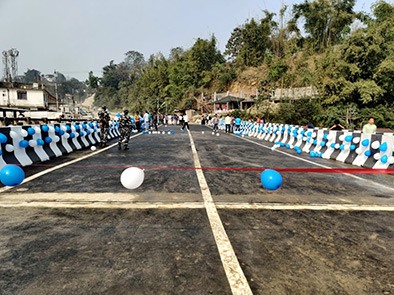 ITANAGAR, 14 Mar: The two-lane bridge over the Senki river in Chandranagar here was inaugurated on Sunday by advisor to PWD minister Phosum Khimhum.

The 46 metre long RCC bridge has been constructed as part of the ongoing four-lane road construction.

Speaking to the press, Khimhum expressed hope that the inauguration of the bridge would ease traffic congestion in the area.

The advisor said the four-lane road project is being monitored at the highest level by Chief Minister Pema Khandu himself.

“The CM being PWD minister in-charge is pushing hard for improving road communication in the capital and across the state. As per the commitment of the CM, majority of work on the four-lane road project has been completed, barring the underpass and two bridges,” he said.

Khimhum also said that the twin capital towns of Itanagar and Naharlagun “are mirrors of Arunachal, and therefore the government is committed to improve infrastructure.”

PWD Highway Chief Engineer Kuru Sera informed that the two-lane bridge has been constructed as per the national highway specification. He also said that blacktopping is being completed.

“Barring the underpass and two bridges which are to be constructed in Chandranagar, the four-lane highway will be ready before 31 March,” said Sera.

Itanagar Capital Region Deputy Commissioner Komkar Dulom while briefing on the status of Package B (Papu Nallah to Nirjuli) and Package C (Nirjuli to Banderdewa) of the four-lane highway work informed that the district administration is waiting for the fund to start demolition work.

“As per our estimate, Rs 12 crore is needed for demolition of structures falling under the right of way (RoW). As soon as the government provides funds we will start the demolition drive in order to provide encumbrance-free roads to the contractor,” said Dulom.

He made it clear that structures coming under the RoW are properties of the national highway and they have to be demolished for constructing the four-lane road. The DC also shared that the compensation fund provided by the ministry of road, transport & highways to the affected people to acquire land for the construction of the four-lane road will soon be disbursed.

“I am getting reports of people damaging newly constructed roads to lay down water pipelines for their personal use. Also, road dividers are being damaged as per whimsy and fancies by some people. People should approach the highway department and other authorities concerned before doing any kind of construction near the highway. The design of the road divider is being decided by the national highway authorities after examining technical aspects,” Dulom added.