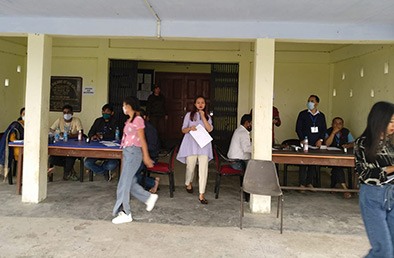 ITANAGAR, 21 Mar: A year after the infamous cash-for-job scam took place in the Arunachal Pradesh Staff Selection Board (APSSB), Secretary Santosh Kumar Rai has assured that the entire selection process will be based on merit, and that a case like last year will not be repeated.

“The Staff Selection Board team is completely committed and all the (newly appointed) officers are full of integrity. We are working hard to regain and retain the trust of the people. We are taking all that happened last year as an aberration and as an exception. The entire board is working to ensure that such a case is not repeated. We request the candidates to trust the SSB and we assure that selection will be based on merit,” Rai said.

On the inconvenience caused to the public because of the shutdown of mobile internet services, the secretary said that the board did not wish to take any chances.

“Even with the physical security arrangements, we did not want to take any chances of any leakage. If one thing goes wrong then the faith of the candidates towards the entire examination process is shaken. That is why we took the extra precaution and requested the department of home to suspend internet services for three hours, so that we could ensure that the exam was fair, transparent and based on merit,” Rai said.

Biometric data was also captured, so that there are no cases of impersonation.

Of the total 25,731 candidates who had applied, about 12,000 candidates downloaded their admit cards and only 8,829 candidates appeared for the exam on Sunday.

“We were expecting a larger turnout, but only a total of 8,829 candidates appeared, which is roughly 34 percent attendance. Even in the last examination, which got cancelled, around 12,000 people appeared for it at the time,” the secretary said, adding that candidates were given till 5 pm of 20 March to download their admit cards.

He informed that the results may take a little time to be declared as materials have to arrive from various other districts, but assured that they would be out before 28 March, which is the date for the skill test.

Rai also informed that the board would soon introduce an examination calendar, so that candidates can be prepared well in advance for upcoming examinations.

No untoward incident was reported from any exam centre.

The APSSB had come under public scrutiny and faced criticism after an optical mark recognition sheet (left blank) was seen doing the rounds on social media soon after the results were published on its website on 14 February, 2020.

A total of 315 candidates, including the one whose OMR sheet was alleged to be suspicious, were shortlisted for the skill test.

An investigation by the Special Investigation Cell (SIC) of the state’s vigilance department revealed that numerous officials of the board were involved in the scam where candidates had paid bribes to secure LDC, JSA and UDC jobs.

Till 24 November, 2020, the SIC had made 21 arrests and chargesheeted 19 persons in this connection.

The investigation is still ongoing.