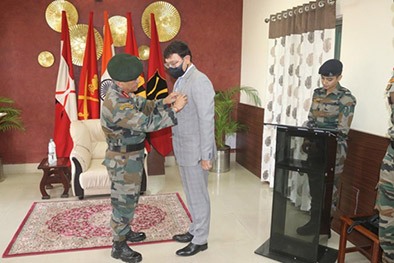 The commendation card was presented to the DC at a function at the Dinjan Military Station on 6 April, according to a defence release.

Lt Gen Chauhan commended the DC for displaying dedication towards his duty and for his ‘relentless’ support towards the Indian Army’s endeavours in developing key infrastructure and security-related installations in the remote district, Kohima based defence PRO Lt Col Sumit K Sharma said in a release.

“Sherpa has been proactive in addressing road connectivity issues and facilitating the Indian Army’s efforts to enhance the quality of life of the troops and the locals staying in remote areas of Arunachal Pradesh. He has also been instrumental in speeding up land acquisition processes, repair of bridges and commissioning of hydel power plant to improve the infrastructure in the region,” Chauhan added.