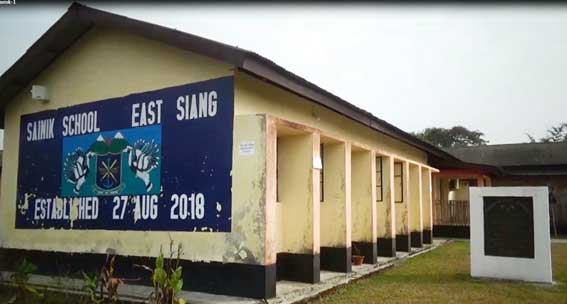 ITANAGAR, 12 Apr: The dreams of parents riding on the sainik school (SS) in East Siang district may be shattered after knowing that all is not well with the lone defence school in the state in Niglok, Pasighat.

It is learnt that only three teachers – of science, English and SST – are running the classes for the entire three batches of cadets ever since other teachers and staffers resigned. It is reported that there are only 15 staffers, including teaching and non-teaching, managing the sainik school.

A few resignee staffers whom The Arunachal Times could get in touch with alleged that the en masse resignation took place due to victimization, harassment, unpleasant administration, unwanted politics in workplace, absence of good governance, non-payment of allowances, non-payment of salary on time, etc.

When contacted, SS Principal Lt Col Rajesh Singh denied the allegation, and instead claimed that the en masse resignation of staffers was mainly because of “ill-infrastructure and depressing accommodation given to them.”

However, countering the principal’s claims, a former staffer said on condition of anonymity: “It’s a big lie and totally wrong to say that the employees are resigning or not joining the school due to unavailability of residential accommodation. The accommodation being provided by the state government in the industry buildings as a temporary arrangement is reasonably good and acceptable.”

A few agitated parents wrote a complaint letter against Lt Col Singh to New Delhi-based Sainik School Society, accusing him of charging exorbitant dietary charges and poorly managing the school administration. The parents alleged that the school charges dietary charges ranging from Rs 2,740 to Rs 50,076 from the second batch of cadets. They sought to know how the cadets sharing the same mess could have such different and fluctuating dietary bills.

However, this daily has accessed a copy of the school’s annual fees structure, wherein the dietary charge column is blank and states that dietary charges are made ‘as per the contract rate.’

On the unreasonable school fees, the principal stated, “If our state transfers cadets’ scholarship amount of Rs 95,000 to the school account, we could adjust it with the cadets’ fees. In that way our school could be the cheapest sainik school in the country.”

Another parent accused Lt Col Singh of creating a fear psychosis among the parents and cadets by narrating his acts of valour in the armed force.

“The principal keeps on repeating his infantry background stories, claiming that he has killed dozens of terrorists, including three people with bare hands,” said a parent who preferred not to be named.

“Instead of managing the school, why does the principal keep on spinning his infantry history. Is that a tactic to silence inquisitive parents and create a fear psychosis among the parents who question his administration and management?” she asked.

“There should be a secure environment for our kids. We have no intention to tarnish someone’s hard-earned image and career, but we are concerned for our children’s safety and quality education,” she added.

Denying the allegation, Lt Col Singh said that he narrated his personal story of valour “as credential references” with no intention to create a fear psychosis and muzzle the parents’ voice.

The parents also accused the principal of running unauthorized coaching classes, inspired by Bollywood movie Super 30, for non-cadets by violating the sainik school’s guidelines. On this, Lt Col Singh stated that the ‘Super 30’ coaching classes were conducted at the request of the local people, the goan burah and members of the Adi Bane Kebang.

A former staffer claimed that there was a congenial atmosphere during the time of former principals Lt Col GG Ashok Kumar and Lieutenant Commander Amit Kumar Dutt. It is said that Ashok Kumar was from the Army Education Corps and Amit Dutt was from the Naval Education Branch. The current principal is from the infantry unit and took charge as the principal in March 2020.