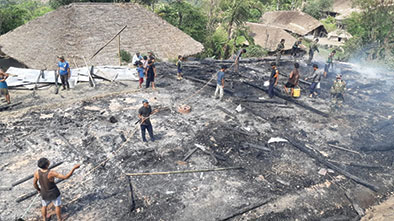 LONGKHAW, 23 Apr: Two houses were reduced to ashes in a fire accident that occurred in Longkhaw village in Longding district at around 10:30 am on Friday.

Police and fire tenders rushed to the spot to control the raging fire. The locals had to dismantle four houses nearby as a last resort to prevent the fire from spreading. Joint efforts by the police, the fire department staff and the locals helped in dousing the fire before it could spread to other areas.

No casualties were reported in the incident.

This is the third fire           mishap to have occured in Longding district this month. Earlier, on 3 April, a fire had destroyed 21 houses and an equal number of granaries in Senua Noksa village, and on the 11th of this month, five houses were completely gutted in Wakka village.