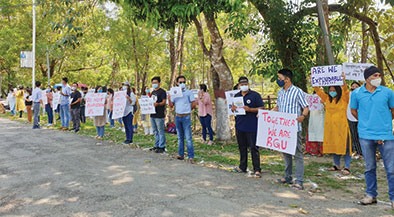 RONO HILLS,  28 Apr: Amid a day long protest on Wednesday by the Rajiv Gandhi University Research Scholars’ Forum (RGURSF),  demanding that the RGU authority roll back its decision to close down hostels from 1 May, the RGU administration said that it “cannot afford to open the hostels for research scholars.”

Also responding to the RGURSF’s Tuesday plea, the RGU said that it has “not acted whimsically, hastily and unilaterally on its own.”

“The decision has been taken in conformity with the directives of the government and as per the Disaster Management Act, 2005. The overall interest, safety and security of the university community, including students, have been taken as paramount importance while taking such decision,” the university said in a press release on Wednesday evening.

The university authorities said that a series of meetings were held to arrive at this decision keeping in view the safety and security of the students and to ensure that the second wave of the pandemic does not spread at community level.

“Group activities and mass gathering have already been banned throughout the state and country as a whole, so boarders cannot be allowed to live in the hostels as there is high potentiality of community spread of Covid-19 and students and staff engaged in hostels are at risk. We cannot afford to open the hostels for research scholars,” it said.

“The statement that came in the newspaper(s) and social media stating that the research scholars are allowed to remain in hostels at various institutions are false and misleading. All educational institutions both government and private, including hostels are being closed down w.e.f. 1st of May, 2021 in the state,” the RGU added.

However, the RGURSF, which met with the RGU registrar, chief warden and senior professors in the evening, informed that they had a lengthy discussion but impasse continues.

“We are continuing with the protest. The university-students deadlock will go on till a feasible solution is given; that is to roll back the hostel eviction notice,” said RGURSF general secretary Prem Taba.

Also extending support to the RGURSF, All Arunachal Pradesh Students’ Union general secretary Tobom Dai said, “The language use by the university authorities in their notice for immediate closure of hostels, such as immediate ‘eviction’ is uncalled for and disheartening. Any drastic decision without involving the students during this time of uncertainty is adding more mental trauma.”

Reportedly, the police were called at night and the scholars were warned that they would be arrested under the Disaster Management Act.