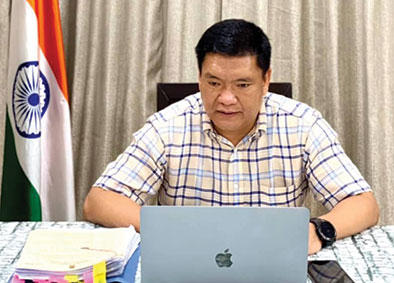 ITANAGAR, 23 May: The state cabinet headed by Chief Minister Pema Khandu last Friday reviewed the status of Covid-19 situation, including the status of oxygen beds, PSA plants, medicines, vaccine procurement and vaccination, and steps taken to fight the pandemic in the state.

It was decided that work on getting 1,000 oxygen beds within a definite timeline has to be expedited. Khandu directed the district administrations to evolve a mechanism at the district and subdivision levels “to assist registration for vaccination of all eligible population, especially in rural areas.”

Convening the virtual cabinet meeting, Khandu said that, while the focus of the government is on fighting the pandemic, other works should also continue.

Reviewing the status of Packages B and C of the four-lane highway (NH 415) from Papu Nallah to Nirjuli (B) and Nirjuli to Banderdewa (C), the cabinet approved the proposal for providing demolition cost as incentive for both the packages, and payment of land compensation for construction of a viaduct over the Dikrong river at Kolma.

It was also decided that for self-demolition of structures on the RoW, the policy of the government on demolition charges in Package A may be applied for both the packages. Khandu said the land for Package C should be handed over to the highway department within seven days, so that the contractor can start work on the ground at the earliest.

The cabinet further approved contribution of revenue from the sale of 1 percent free power from the 12 percent share of the state government from the Ranganadi HEP (405 mw) to the local area development fund (LADF) with effect from 1 April, 2020.

In another development, the cabinet decided to allot the New Melling HEP (90 mw) to the NEEPCO, in pursuance of the national hydro policy and the Arunachal hydro policy. The free power to the state will be 12 percent, with an additional 1 percent for LADF. The state government will also allocate 1 percent from its free power allocation for LADF.

The cabinet, however, stated that while signing the MoU with the NEEPCO, a condition should be added that the project work shall commence at the ground within two years of the signing date. This can be extended for a period of one year for reasons to be recorded in writing, and in case of failure to commence work at the ground within a three-year period, the MoU shall be deemed cancelled.

The cabinet asked the land management department to examine the utility of the Jhum Land Regulation, 1947, in the present times and bring out a uniform policy for land acquisition, including the amended Right to Fair Compensation and Transparency in Land Acquisition, Rehabilitation and Resettlement Act, 2013, and the rules made thereunder.