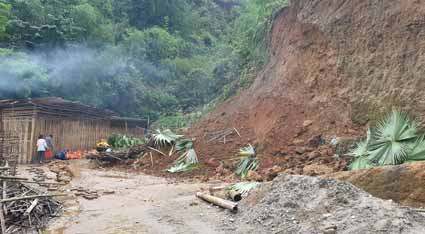 More than 150 people live in the centre, informed Nabam.

He told the media that a massive landslide triggered by heavy rain in the wee hours of Sunday damaged several infrastructures in the campus, including the temporary kitchen, the washroom, a set of pipelines for washing utensils, and a handwashing system. “Luckily, no one was injured in the incident,” he said.

Recovering drug addicts, mentally and physically challenged people, widows live in the living home, which is also called ‘a home for no home’.

“A home for no home is totally functioning on the basis of support from well-wishers, likeminded people and cooperation of the general public,” said Nabam.

“Since the debris and the slide are huge and it would not be possible from my side to clear it, I sought support of the disaster management authority and well-wishers to clear the campus,” Nabam added.