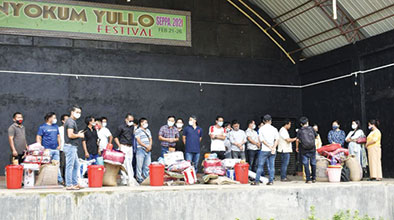 ITANAGAR, 12 Jun: Environment & Forests Minister Mama Natung has provided financial relief to the victims of the fire accident that had occurred in New Seppa in East Kameng district on Friday.

Three houses were gutted in Dori Putung Colony there on Friday morning. The relief amount was handed over to the victims – Lalung Yangda, Pacha Veo and Rishu Dada – by the minister’s OSD Jiten Kamsa.

The EKSWCO has appealed to the district administration to help the victims as per government norms. The victims are temporarily taking refuge in a church in Doriputung Colony.

The EKSWCO chairman further appealed to the town MLA to initiate steps to construct a ring road in New Seppa, in the Puroik Colony area. The area is inaccessible to fire tenders.