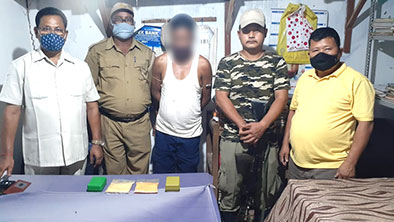 MAHADEVPUR, 13 Jun: The police here in Namsai district on Sunday apprehended a drug peddler from the Dirak check gate at around 5:25 pm.

Mahadevpur Police Station OC, Inspector G Ronya informed that one Pranab Rajkowa, a resident of 2 Mile in Namsai, was arrested following a tip-off from a reliable source that he was bringing contraband substance from Assam, to be supplied to drug addicts in Namsai, on his motorcycle (AS-23Q-2731).

Following the tip-off, a police team led SI AN Singh, and accompanied by Executive Magistrate NL Naam, was deputed at the check gate to wait for the suspect to arrive.

Ronya said that, at about 5:25 pm, upon receiving information from the SI about the arrival or Rajkowa at the check gate, he along with a police team rushed to the Dirak check gate, where they arrested

the peddler under Section 50 of the NDPS Act, in the presence of the executive magistrate.

“During search, two packets of powdery substance, 13 grams each, suspected to be contraband drug brown sugar (heroin) were recovered from Rajkowa’s Bullet motorcycle seat cover. The drug was hidden inside the seat cover of the bike. The contraband drug substance was packed in a polythene pouch inside a soap case,” the inspector said.

“Accordingly, he (Rajkowa) has been brought to the Mahadevpur police station with his bike and the recovered contraband substance,” Ronya said.