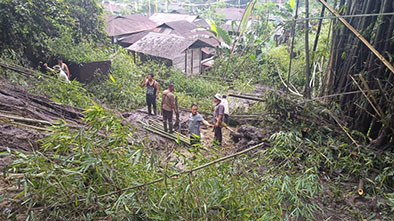 All the nallahs and rivers in Tuting area are flooded with rainwater, and the continuous downpour has triggered major landslides in Pekong village, where the house of one Kunjang Gyaltsen was badly damaged by flood and landslide on 17 June at 12:30 am, the ZPM said, adding that there was no report of any casualty.

Lapchi, along with Tuting ZPM Tachik Dugong, Pekong GPC Sonam Doima, Tuting CO Yapi Gongo, Pekong HGB Pema Choira, officers of the WRD and others inspected the flood- and landslide-hit areas on 17 June and prepared a damage report for submission to the state government.

Both the ZPMs assured to take up the matter with Health Minister Alo Libang, who is also the Tuting-Yingkiong MLA, and the state government for providing assistance to the victims. They urged the WRD to take up flood protection measure urgently to protect Pekong village from landslides and floods in the future.

Meanwhile, ex-Tuting ASM Ledup Dorjee and 10 others have submitted a representation to the Tuting ADC, seeking flood protection works to protect the villages.

Nima Sangey, senior leader of Tuting area, urged the state government to provide immediate relief to the victims, and to take up flood protection works to protect Pekong village.