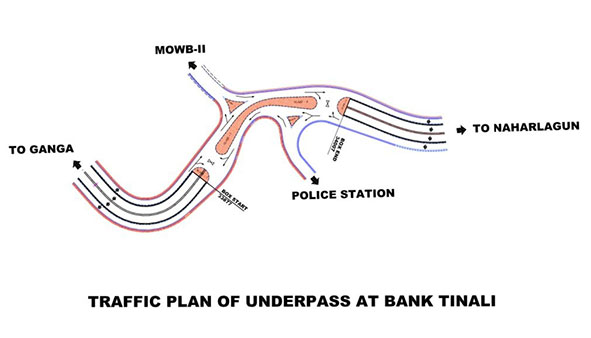 ITANAGAR, 2 Oct: The underpass and its service lanes in Bank Tinali, and the second bridge in Chandranagar here were opened for traffic by Itanagar MLA Techi Kaso on Saturday morning.

Addressing reporters, Kaso said that “everyone involved has given their best efforts to ensure that a good quality road is opened for the public. With this, Package A of the four-lane highway is complete.”

He also asked those who are currently constructing buildings to ensure that they have parking space, keeping in mind such infrastructural developments in the future.

“We are hopeful that the people of the state will learn to accept that certain amenities and infrastructure are necessary for the wellbeing of all and plan accordingly,” he said.

He also informed that the bridge near the helipad in Naharlagun will be completed within March next year.

In a statement, Highway Chief Engineer S Sumnyan informed that “the underpass (from chainage km 33+877 to km 34+100) of NH 415 Package A, at Bank Tinali and the second bridge at Chandranagar have been constructed by M/s TK Engineering Consortium Pvt Ltd, under the supervision of the PWD, Naharlagun highway division, Nirjuli, to regulate the traffic and enhance the traffic worthiness.”

The total length of the underpass is 353 metres. Its top deck-slab portion is attached with service roads from both the left hand side and the right hand side from the C Sector junction to the BSNL approach junction.

“The construction started from 27 January and was completed on 16 September in a span of eight months only. The underpass is going to open on trial for the public from 6 am of 2nd October, 2021,” the CE said.

“The span of the second bridge at Chandranagar is 23 metres and width is 12 metres, including footpath,” he informed.

“We are thankful to the people of Itanagar for their kind cooperation during the construction of the bridge,” Sumnyan added.