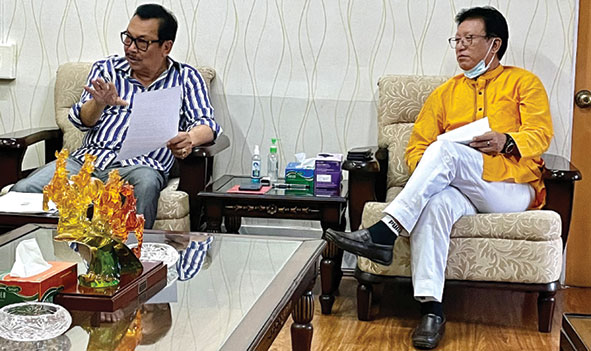 ITANAGAR, 23 Oct: Deputy Chief Minister Chowna Mein convened a meeting with the members of the core committee and the sub-committee for recognition of unsung heroes at his official residence here on Saturday.

Asking the members of the sub-committee to start the work of data collection for identification of the unsung heroes of the state, Mein urged them to “do it wholeheartedly as it will be an important document on the history of Arunachal Pradesh.”

He further urged the committee to “work as a team seamlessly, without giving any scope for criticism in future.”

It was decided to place a proposal before the Indian Council of Historical Research (ICHR) to set up a separate ICHR centre in Arunachal Pradesh as the state does not have any such centre.

The setting up of such a centre in the state would facilitate research scholars and students in carrying out research works and studies on the state’s rich history and culture.

Rajiv Gandhi University (RGU) Vice Chancellor Prof Saket Kushwaha presented a timeline to be followed by the sub-committee, which will work under the aegis of RGU. As per the timeline, the sub-committee will submit the final report by the end of June 2022.

Nepha Wangsa, author of The Nyinu Massacre, showed a collection of original

documents from the national archive of the British Library in New Delhi. These documents will be handed over to the core committee through a formal ceremony on a later date.