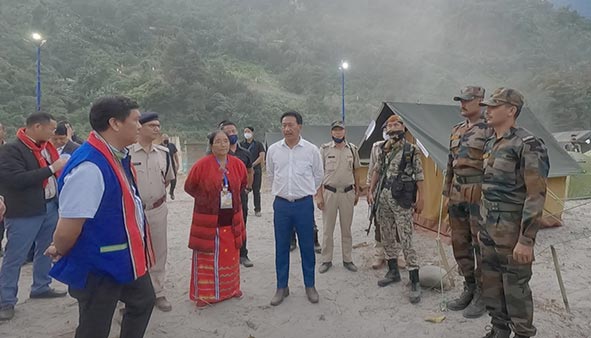 DAPORIJO, 12 Nov: “We are committed to provide road connectivity to all, and we will do it,” Chief Minister Pema Khandu said here in Upper Subansiri district on Friday.

“All hurdles will be resolved, and if any corruption is proved, no one will be spared,” Khandu said during a public meeting.

He said that the Potin-Pangin stretch of the highway was mired in several issues, including corruption in payment of land compensation. “The central government divided the stretch into nine packages, which have been tendered and work has already started,” he said.

Stating that “Package 5 is facing some hurdles,” the chief minister assured to take up the matter with the department concerned at the earliest.

He also assured to provide fund for giving Daporijo township a facelift, with a caution that “anybody found misusing fund will be dealt with strictly.”

Responding to a memorandum submitted by local MLA Tanya Soki, Khandu expressed appreciation for the proposal for a proper drainage system and widening of all township roads and streets. He said that the proposal, “when executed efficiently,” would help in beautification of the picturesque town on the banks of the Subansiri river.

The CM appealed to the people to keep the town clean. “We all miss the old Daporijo that we knew and loved. With a properly covered drainage system, the narrow streets would widen, but you need to keep your town clean and free of garbage to restore its glory,” he said.

He assured to provide funds for augmentation of the township’s water supply plant, when he was informed that the existing plant is unable to meet the entire town’s needs.

To a request for exploring the possibility of setting up a hydropower project in the district, the CM said it was up to the people.

“If you are sure and assure your all-out cooperation and support, I can always approach public sector undertakings like NHPC to explore its viability,” he offered.

At the beginning of the meeting, Khandu laid the foundation stones of five major projects, viz, an eco-fishery park under the Chief Minister’s Challenge and Innovation Fund; a double-storied multipurpose convention hall; a material recovery facility of 5 ton capacity under the solid waste management scheme; improvement of the district headquarters road under the Chief Minister’s Comprehensive Road Programme; and reconstruction of a steel truss bridge over the Sigin river at Daporijo.

A day earlier, at Kodak, in a public meeting hosted by Taliha MLA Nyato Dukam, Khandu said that “the demand for creation of a new administrative circle of Lable will be positively considered by the government.”

He asked Dukam to visit Paying circle – which reportedly is still unconnected and no elected representative has ever visited it – to study and understand the ground situation and submit a report to the government.

Lamenting the very slow progress of the Tato-Taliha road, Khandu appealed to the people to keep the general good of the area above personal gains. He was hinting at the reported demand for huge compensation for land by the people of the area.

“If Upper Subansiri has to develop at least at par with the rest of the districts, the mindset and approach of the people should change,” Khandu said, and appealed to civil society bodies to “take the lead.”

To the demand for establishment of a Jawahar Navodaya Vidyalaya in Taliha, Khandu said that it is already in the pipeline.

The visit was also marked by the inauguration of the district museum, the newly constructed G+2 school building, and the auditorium of the government higher secondary school in Daporijo, besides laying of foundation for a badminton hall in Sippi, and dedication of the rechristened Tadak Dulom District Hospital along with an oxygen plant to the people of Upper Subansiri. (CM’s PR Cell)