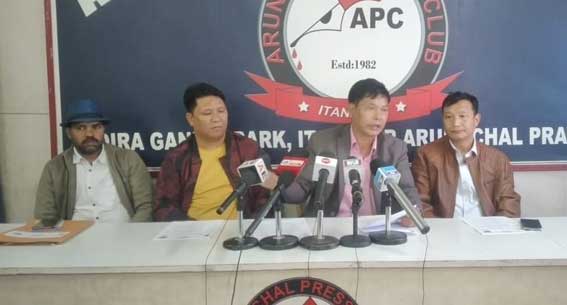 ITANAGAR, 2 Dec: The Arunachal Pradesh PDS Carriage Contractor Association (APPDSCCA) said that it has decided to boycott lifting and transportation of free rice under the Pradhan Mantri Garib Kalyan Anna Yojana (PMGKAY) from December onwards, in protest against the state government’s failure to pay for lifting and transporting the rice.

Addressing media persons at the Arunachal Press Club here on Thursday, APPDSCCA president Sangha Tagik Massang said, “We have carried out smoothly the lifting and transportation of PMGKAY free rice distribution for 15 months, starting from 1 April, 2020 to November 2021, and even during Covid-19 pandemic situation we did not stop, whereas we face lots of problems in the process of transportation of free and normal rice in the state.”

The state government has to clear payment of around Rs 15.68 crores for 15 months for lifting of PMGKAY rice and more than Rs 14 crores for normal rice in one year, he said.

“We did our works sincerely, but till date not a single penny has been paid to us. In this regard, we have written many times to the authorities concerned, but instead of clearing our pending bills, many deputy commissioners of the state doubted our sincerity and accused us,” Massang said.

“Therefore the APPDSCCA has decided to boycott the lifting of free rice distribution, which was extended by the central government till March 2022 next,” Massang said.

Further, the APPDSCCA demanded that the government enhance the rice-carrying rate, stating that the present carrying rates of Rs 327 for hard places and Rs 100 for soft places are not sufficient and the contractors suffer losses.