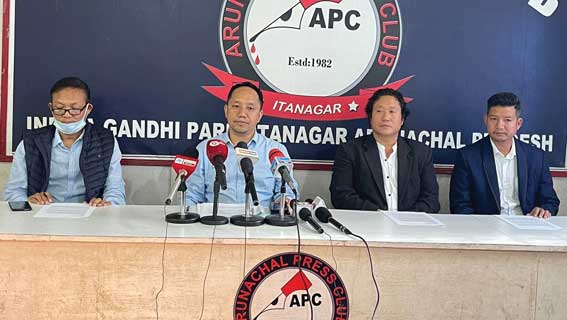 ITANAGAR, 9 Dec: Representing the bereaved family of the twin murder victims of 30 November, the Toko Welfare Association (TWA) on Thursday sought early justice for them.

The bodies of two brothers identified as Toko Riyam (24) and Toko Ratam (19) were found under mysterious circumstances near Vaisnavpur village in Harmuti under Laluk Police Station Assam.

In a press conference, TWA general secretary Toko Tatung informed the media that on the fateful evening of 29 November around 8pm, both Riyam and Ratam went to attend Doimukh Mela and did not return. Panicked family members had registered a missing report at Nirjuli police station. Their bodies were found the next day. A murder case had been registered with Laluk police station and one prime suspect has been arrested so far and other accused are absconding,” informed Toko Tatung.

TWA had submitted a representation to Home Minister Bamang Felix seeking his intervention to ensure early delivery of justice to victim’s family. Tatung further informed that the minister for home has assured to go to the root of the case so that all perpetrators are brought to justice.

“We firmly believe justice should be done so that such gruesome incident is not repeated in future with anyone,” said Tatung.

“The twin murder is a wakeup call for the people of Arunachal and the law enforcement authority. Our boundaries must be manned,” said Tatung claiming Banderdewa, Doimukh, Gumto stretch of Assam-Arunachal boundary as becoming hot-spot for all traffickers and a security concern.

“We have requested the home minister to monitor the crimes at the highest level along with Assam counterpart,” he added.

The Toko Welfare Association suggested the state government to introduce inter-state crime monitoring team comprising of IGP level officers from Assam and Arunachal to monitor the criminal activities along the boundary.

He also informed that Capital Complex SP and Lakhimpur SP have been extremely professional and exemplary in the particular case and cooperated with the victim’s family.