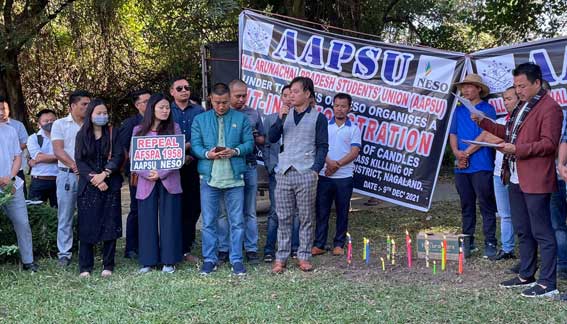 ITANAGAR, 9 Dec: A sit-in protest was organized by the All Arunachal Pradesh Students’ Union (AAPSU) under the aegis of North East Students’ Organization (NESO) in protest against the killing of 14 Oting villagers in Mon district of Nagaland by the Assam rifles last Sunday.

Addressing a host of students gathered at IG Park NESO coordinator, Pritam Sonam called Arms Armed Forces Special Powers Act (AFSPA) a protectorate act for the arm forces to use against civilians. “Arm forces are using it just to harass and kill innocent people and rape,” he said.

He said that NESO has been protesting against the act for the past 20 years and will continue to do so until it is repealed.

“No problem or dispute will ever be solved at gunpoint. It can only be solved through negotiations, meetings and development,” he added.

Sonam sought to know if any insurgency problem has been solved with this act till now. He stated that there are various provisions of law like CrPC and IPC to curtail illegal activities but the government is adamant on continuing with the imposition of the draconian law.

He claimed that the arm forces carry out fake encounters because of AFSPA. He sought to know from the state government as well, if any of the insurgency problems have been solved in the TCL region with the enactment of the Act till now.

“But the state government will not be able to answer this. All the encounters and the arrests that we see in the news are all fake. There have been many such cases in Manipur and Nagaland,” he added.

Citing the example of Punjab where AFSPA was enforced in the early 80s but was repealed couple of years later, he sought to know why it cannot be repealed in the NE states as well.

AAPSU general secretary Tobom Dai said, “When a person is given so much power and is not answerable to anybody that too, in a democracy then there will be problems.

We are not against the army but are against those black sheep who in the name of security carry out these activities under the aegis of AFSPA. They need to be punished.”

“You should have known how the innocent villagers were killed by the army. Whatever happened in Oting, the GoI needs to ensure that it is not repeated,” he added.

Dai called upon everyone to keep the Oting incident as a reminder to fight against the draconian act.

Citing the example of how Meghalaya managed to control its insurgency problem, Dai said, “The same could have been applied in place of this draconian act.”

An advocate working with the human rights network of the state E. Mili said that AFSPA protects arm forces from accountability and acts above the law.

“They are our protectors and we should be feeling safe with them but with this act, they have become our harassers. Children become traumatized looking at their uniform as they now identify that uniform with harassment,” he said.

Pointing out that the army did not even bother to confirm the identity of the Oting villagers before carrying out the shootout, he said that ‘It was because of their indifferent attitude towards civilians.’

“They think they are above the law,” added Mili.