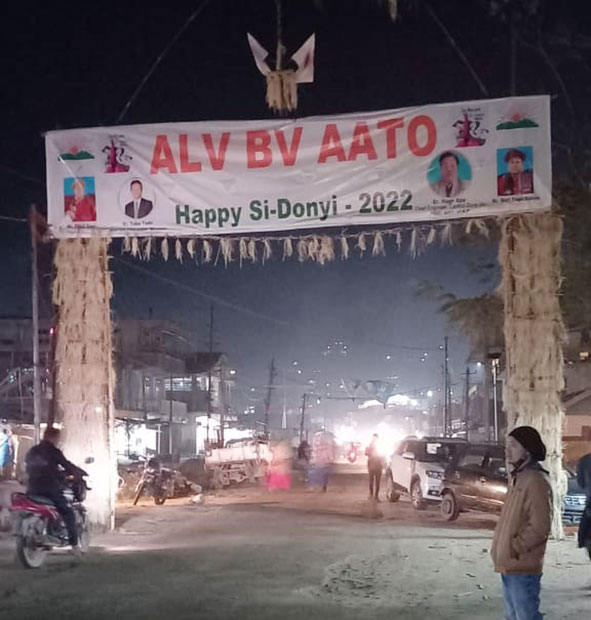 DAPORIJO, 3 Jan: A joyously festive mood reigned in the township here in Upper Subansiri district as the celebration of the central Si-Donyi festival begins on Tuesday.

Si-Donyi is the major festival of the Tagins and it is celebrated from 4 to 6 January every year.

The festival could not be organized last year owing to the Covid-19 situation. This year, it is being organized in a grand manner.

On Monday, folksong and folkdance competitions were conducted. Yane Riba of the Yarkum Ane Punung team bagged the first prize in Nymv Kapnam, while the second prize was won by Dario Mara of the Chungri Ane Punung team.

In Bogv Kapnam, Yanga Lusi Tamin of the Yikji Kampu Punung team won the first prize, while the second prize was bagged by Dario Mara of the Chungri Ane Punung team.

Earlier in the day, Upper Subansiri DC Mika Nyori, accompanied by festival celebration committee members, visited the festival ground. He inspected the food stalls, the priest’s house, the rostrum and the entrance gate.

Nyori has arranged a generator set for emergency use, and contributed 40 cases of soft/carbonated drinks to the organizing committee.