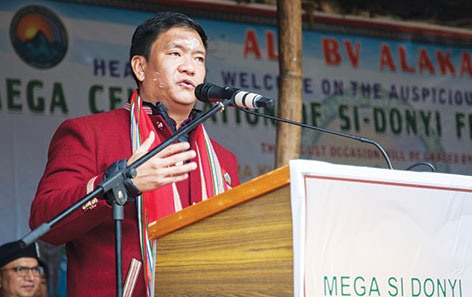 ITANAGAR, 7 Jan: Chief Minister Pema Khandu said that the government is now focused on speedy development of the areas along the line of actual control (LAC).

The CM on Thursday concluded his three-day tour of Upper Subansiri district. The tour, during which the CM was accompanied by DCM Chowna Mein, MP Tapir Gao, Speaker PD Sona, MLAs Laisam Simai, Zingnu Namchoom, Hayeng Mangfi and Jikke Tako, Secretary Dani Salu and Director Abu Tayeng, was aimed at knowing the living conditions of the people of the remote areas, and to learn about their expectations from the central and state governments.

Addressing public meetings at Taksing, Gelemo and Nacho, Khandu emphasized on development of the border areas, and said that the government is now focused on speedy development of the areas along the LAC “by constructing roads up to the border, and building other vital infrastructures.”

He also said that the regions near the international borders in Arunachal will soon be connected with 4g mobile connectivity.

Highlighting the importance of the presence of civilian populations in the border areas, the CM said that they should be able to move freely and take up activities for sustenance near the LAC, “which would help deter enemy’s claim on our territory.”

“In Tawang, human activity like yak rearing, tourism and pilgrimage centres are being developed right at the border, which aids in maintaining vigil at the LAC,” Khandu said.

Having personally inspected the condition of the road from Taksing to Nacho, and to Maza sector, he promised to “take up with the Centre for improvement of road infrastructure.”

On the first day of the tour, the CM and his team visited the ITBP Ghora post near the LAC. On the second day, on the way to Nacho, the CM held a meeting with the villagers of Gelemo and met the army, ITBP and BRO officials there.

At Nacho, the CM reviewed the work on defence and PMGSY roads with the army, the BRO and the works department. On the way to Nacho from Taksing, the CM unveiled a bust of havildar Dhere Thapa of the Indian Army at his memorial. Thapa is said to have single-handedly stopped waves of invading Chinese army for about two hours in the 1962 war.

On the third day, the CM laid the foundation for a tourist lodge and a convention hall in Nacho. He also dedicated to the people the Bailey bridge over the Keo and the Koduk rivers, built by the rural works department.

The three-day tour concluded with the CM and his team attending the Si-Donyi festival celebration in Nacho. (CM’s PR Cell)