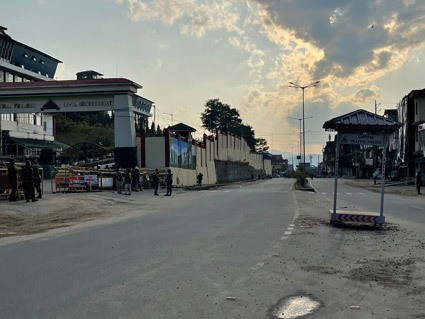 The ICR was totally shut, except for the hospitals and a few pharmacies. Vehicles were off the road, barring a few private vehicles, and shops and government institutions remained closed.

ICR DC Talo Potom informed that 29 persons were put under preventive detention at the Itanagar police station, and were later sent to the district jail in Jully for 12 days.

Another seven bandh enforcers were detained at the Chimpu police station. Two of them were later released after being bound under Section 107, it is learnt. Reportedly, earlier in the morning, the ICR police foiled an arson attempt in Papu Nallah.

According to the police, no major incidents were reported on Thursday, except for a few stray incidents. It was reported that one car was burnt in Chimpu. However, the incident is yet to be ascertained.

Fearing that antisocial elements might take advantage of the night during the bandh hours, the DC appealed to the residents to stay at home.

It is reported that 40 companies of security forces have been deployed in the ICR to deal with the bandh.

The ANYA has levelled a series of allegations against the CM and his relatives, stating that they were involved in a multi-crore rupees scam and misuse of funds under various departments.

The ANYA is demanding that the chief minister issue a clarification “with valid reasoning” on the claims within 15 days, failing which, it said, it would launch a democratic movement, demanding his resignation.

However, it has not substantiated its allegations.