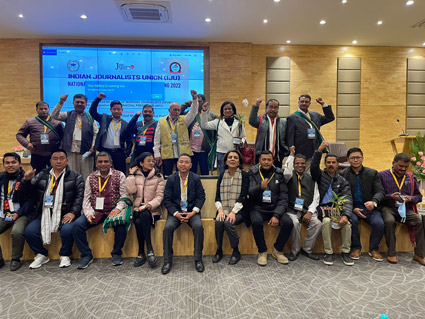 In its national executive committee (NEC) meeting held here, the IJU called upon the NDA government at the Centre to introduce a uniform WJPS across the country.

“The various state governments have introduced pension schemes for journalists, such as Arunachal Pradesh Rs 25,000, the highest amount given, and there is Assam and Karnataka giving Rs 10,000, Manipur Rs 8,000 for retired journalists. At the same time, Odisha government has introduced medical coverage of Rs 5 lakhs to working journalists and their families in the state,” the IJU stated in its resolution.

The union further stated that the journalists who carry out their duties to keep the public informed are ill-paid and an overworked lot. The working and economic condition of the journalists in semi-urban and rural areas is therefore miserable, it said, and urged all state governments which are yet to implement pension scheme for journalists to immediately take steps to introduce it for all working journalists, irrespective of accreditation.

The IJU also expressed grave concern over the surveillance of at least 40 journalists, among 300 others, including opposition leaders, ministers, constitutional authorities and activists through hacking of their phones by the Israeli Pegasus spyware.

“The IJU is of the firm opinion that snooping on journalists is not just a breach of their right to privacy like any other citizen, but worst, compromises their sources, amounting to stifling independent and investigative journalism,” it said.

The union noted that the government chose not to come clean on the issue and tried to wash its hands off the snooping scandal by suggesting that the Pegasus report was to “malign the Indian democracy.”

This is far-fetched and unacceptable, the NEC said, and welcomed the probe ordered by the Supreme Court by formation of a three-member committee under a retired Supreme Court judge.

“While the NEC awaits anxiously the findings of the report, it hopes that the surveillance of journalists is viewed as yet another form of intimidation of journalists, especially those critical of its governance,” it said.

“This is sought as it has come to light that large numbers of women journalists are facing hurdles in carrying out their responsibilities, and skewed policies are impacting their promotion prospects. In particular, the NEC demands that media houses provide maternity leave, child care leave and night transport to women journalists,” the NEC said.

At the same time, the NEC urged all media houses to have in place the mandated internal complaints committee to entertain sexual harassment cases and give justice to the victims.

The NEC reiterated its demand that the present Press Council of India be converted into “a media council with some more statuary powers, so that there is peer supervision over the media of all platforms, print, electronic and digital.”