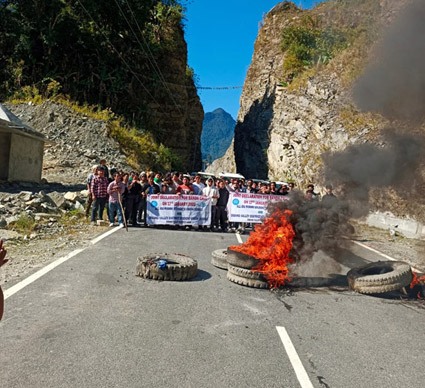 ANINI, 20 Jan: Dibang Valley district is reeling under a complete blockade, cut off from the rest of the world, since the last four days as the All Idu Mishmi Students’ Union (AIMSU) and the Dibang Valley District Students’ Union (DVDSU) have jointly enforced an indefinite bandh, which commenced on 17 January, in protest against the district administration for the delay in disbursement of compensation to the families affected by the Dibang Multipurpose Project (DMP).

The student bodies said that the bandh will continue until the land management commissioner does not issue an order approving the disbursement of compensation in Dibang Valley “within an immediate timeline.”

“We will not accept anything later than a time period within the next seven to ten days. The land commissioner has been playing with word-of-mouth till now regarding the disbursement. Hence, unless we get an order in black and white from him, we will keep the agitation on for as long as it takes,” they said.

DVDSU speaker Handi Molo said, “Very clearly, as long as the bandh call carries on there are chances of occurrences of mishaps. Land Management Commissioner Prashant Sitaram Lokhande will solely be held responsible for any chaos and any mishaps or consequences of the bandh.”

The AIMSU and the DVDSU said that they have been forced to take this step because of no response from the authorities regarding their grievance.

“Although this is not a political issue, it is sad to see that there has been no political backup or support in the matter yet. AIMSU and DVDSU, with the support and cooperation from the general public, are taking this extreme measure as federal bodies,” they said, adding: “Our stance is very clear. Give us a date in written for starting the disbursement process and we will stop the agitation. Otherwise the bandh will continue indefinitely and any consequences of this will be held as the doing of the land management commissioner.”

Meanwhile, the Idu Mishmi Elite Society (IMES) has written a letter to the Dibang Valley deputy commissioner, demanding a notification regarding the commencement of the disbursement process immediately, so as to not further hamper essential services and other transportation and development-related activities because of the blockade.

IMES GS Manmohan Mihu said, “The Anini DC has sought an approval from the land management commissioner, Itanagar. However, the matter is still pending before the table of the commissioner for approval and we don’t know for what reason it is still pending. We strongly feel that it is negligence on the part of the district administration. The public is suffering since 17 January as the student organizations and project-affected families have called for a bandh and it is continuing without any outcome from the administration, and the poor public is at the receiving end as all the transportation has been put on hold.”

The AIMSU and the DVDSU informed that, although the district has been put under complete blockade, medical cases are being exempted and are being allowed to move towards Lower Dibang Valley district for treatment.

“We have been moving patients in our personal vehicles too, to help them get the required medical attention. As for stranded people, they are being taken care of too in terms of food and stay. Everything is being provided by us. We are doing this as peacefully as possible,” they said.