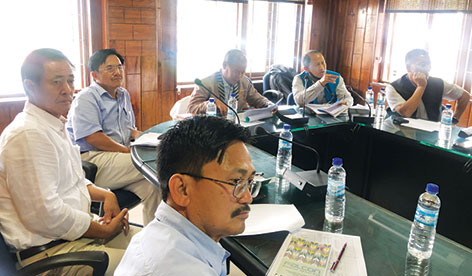 He said this during a meeting of the department of hydropower development held here on Wednesday, to discuss the modalities to be adopted for improvement of power generation from the state owned micro/mini/small hydel plants which are under operation and maintenance by the DHPD.

Raja informed that in the first phase of Golden Jubilee Border Village Illumination program, a total of 17 micro/mini hydel projects of various capacities were sanctioned with financial assistance from NABARD to provide access of reliable power to the villagers living in the borders.

In the meeting, it was reported that the department could not generate its maximum capacities of power due to reasons, such as under drawal of power due to non-availability of grid connectivity, paucity of sufficient funds for undertaking minor/major repairing/restoration and maintenance works etc. on time.

Speaking during the meeting, CE(WZ) elaborated on the status of carbon credits registration and informed that a total of 98 mini/micro and small hydropower plants of the state

comprising 50.295 MW installed capacity have been qualified and registered under Universal Carbon Registry under its first phase.  “In its second phase, a third party auditing and verification is being carried out and will be completed by the end of April 22. Further, in its third phase, trading of the carbon credits in India’s multi commodity exchange will start by 31 May this year. The revenue out of this process is expected to be around Rs. 1.15 crore per annum,” he added.

Later, advisor to minister for power & hydropower Balo Raja informed that a coordination meeting with the power and the hydropower departments will be convened on 29 April next to resolve all such issues of under drawal power, T&D links and grid connectivity, wherein both commissioners of power & hydropower, secretary (hydropower) and all the CEs, SEs and other concerned officers of both the departments will take part.