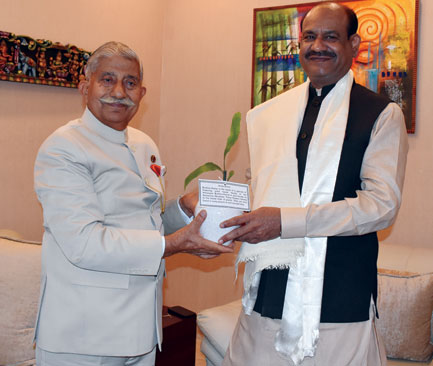 ITANAGAR, 13 May: Governor BD Mishra said that the need of the hour is to include a mention of the fundamental duties in the preamble to the Constitution.

During a meeting with Lok Sabha Speaker Om Birla at the Raj Bhavan here on Friday, the governor said that the step would “promote the commitment to duties towards the nation amongst the people, along with much in demand the fundamental rights.”

The governor briefed the speaker on the developmental initiatives of the state government, and the challenges being faced.

“The state machinery is working with the spirit of ‘Sab ka saath, sab ka vikas, sab ka vishwas aur sab ka prayas’. The people of Arunachal Pradesh have a high sense of nationalism and take pride in being Indians,” he said.

The speaker later planted a sapling of cherry blossom in the lawn of the Raj Bhavan. (Raj Bhavan)