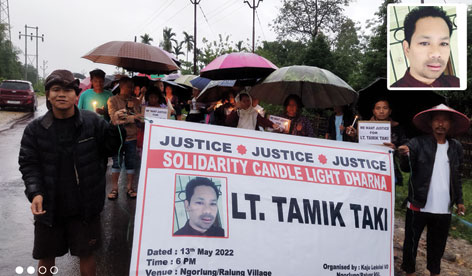 RUKSIN, 14 May: Amid the rain, the people of Ngorlung and Ralung villages in Ruksin subdivision of East Siang district observed a candlelight dharna on Friday evening to demand justice for tax & excise (T&E) inspector Tamik Taki, terming his death a murder.

Taki had reportedly gone missing from Itanagar on 22 April. His body was later found in the Siang river, near Jido village in Tuting circle of Upper Siang district.

The dharna, organised by the Kaju Lekolai village organisation (VO), saw the participation of members from 15 SHGs, besides intellectuals, panchayat members, social activists and others, demanding immediate apprehension of the culprit(s) involved in the alleged murder.

VO president Yatu Panggeng termed the murder “an extremely heinous crime against humanity and a pre-planned one,” and appealed to the Upper Siang police to crack the case and put the culprit(s) behind bars as early as possible.

The participants later observed a 30-second silence as a mark of respect to the deceased.