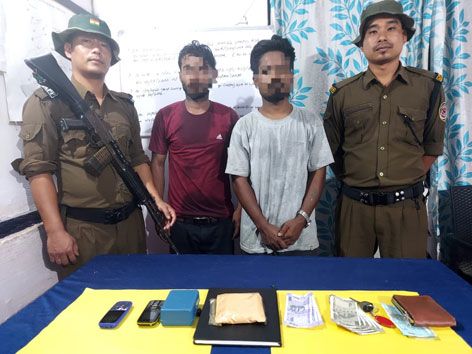 KHONSA, 21 Jun: The anti-drug squad (ADS) of the Tirap police on Tuesday arrested two drug peddlers and seized suspected heroin from their possession.

Acting on a tip-off, the ADS, led by Deomali Police Station OC Inspector Tomai Wangpan, intercepted a Deomali bound scooter at the Dirak check gate at around 5:30 pm, and, during search, suspected heroin weighing approximately 13 gms, along with Rs 3,520 were recovered from the duo.

The drug peddlers have been identified as Tinku Sah (30) from Muzzafurpur, Bihar, and Vishal Barman (26) from Cooch Behar, West Bengal.

The drugs were seized in the presence of an executive magistrate.

A case has been registered against the duo at the Deomali police station under the NDPS Act.

SP Kardak Riba commended the ADS team and said that crackdowns on drug peddlers and addicts will be continued in the district. (DIPRO)