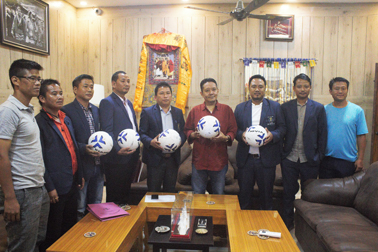 Staff Reporter
ITANAGAR, Sep 7: The first ever football league tournament in Arunachal Pradesh christened as T K Arunachal Super League 2017 was formally launched by Government Spokesman Passang Dorjee Sona in presence of officials of Arunachal Pradesh Football Association (APFA) at MLA Cottage here on Thursday.
Organized by the APFA, the tournament will be conducted at Rajiv Gandhi Stadium, Naharlagun from September 23 to November 26.
Seven clubs will vie with each other for the top honour during the two-month-long league tournament. The clubs are Todo United, Nirjuli Utd. FC, Gora Makik SC, Tagung Neri SC, Capital Complex FC, Bamang Taji FC, Deed Circle FC.
The inaugural match will be played between two Capital based clubs, Todo United and Capital Complex FC.
In total, 26 matches will be played, which will be held on every Saturday and Sunday, and the grand finale will be played on November 26.
During a brief interaction with the Government Spokesperson at his official residence here, APFA General Secretary Kipa Ajay apprised him about the various problems being faced for development of football in the state.
He stressed on the need for conducting football tournaments at grassroots and producing sufficient referees and coaches, for which he sought the government’s full support and cooperation.
The APFA General Secretary rued the lack of football infrastructure in Arunachal. He said that barring Arunachal Pradesh, all other NE states have got sufficient infrastructure. He said that states like Manipur, Meghalaya, Mizoram and Assam have world class football stadiums, and immediate neighbour Assam is going to host a Junior World Cup match.
He also informed the Government Spokesperson about the Meghalaya Government’s five-year football development plan of Rs 560 crore.
After a patient hearing, Sona advised the APFA to approach the concerned authority or Parliamentary Secretary for Sports, Nyamar Karbak and take up the issues with him. He, however, said that the government has accorded top priority to sports and infrastructure is being developed in phase-manner throughout the state.
Wishing all the best for the ensuing Super League, Sona hoped the tournament would go a long way in tapping and producing football players.
AFPA Vice Presidents Likha Tapu and Kipa Takum, Tournament Director John Neelam, Spokesperson Orin Lego, Treasurer Takam Dado Tallom and member Joram Appa were present during the launch ceremony.
T K Engineering Consortium Pvt Ltd is the title sponsor of the football league, while the league partners are 92.7 Big FM and Growmore Advertisement House.