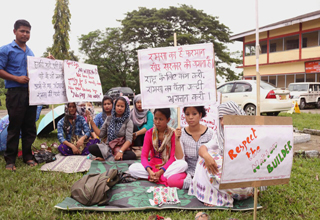 ITANAGAR, Sep 11: In continuation, a mass peaceful dharna against the non-release of five months of pending salaries was carried out on Monday across the state by the Central Executive Committee of Arunachal Rashtriya Madhyamik Shiksha Abhiyan Teachers’ Association (CEC, ARMSATA) and its district units.
Holding sit-in protests outside the district offices of Deputy Commissioners and DDSEs, the CEC ARMSATA said that the dharna was not organised to hurt any individual, but to highlight the grievances faced by the teachers serving under the RMSA.
Under the RMSA, 15 districts of the state are covered, and teachers have reportedly not received salaries from April to August 2017.
The protest in various districts was led by respective ARMSATA district units outside the DDSE or DC offices at Tawang, Bomdila, Yupia, Ziro, Palin, Koloriang, Daporijo, Yinkiong, Pasighat, Alo, Roing, Changlang, Namsai, Tezu and Hawai.
The Central Executive Committee in a communiqué informed that it would launch its third phase of democratic movement with an indefinite pen down strike from September 14 next till the release of their five months’ pending salary.