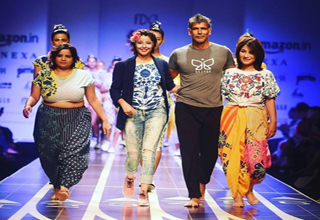 ITANAGAR, Oct 16: Anshu Jamsenpa walked the ramp as show stopper at India Fashion Week 2017 held from October 11 to 15 in NSIC Okhla New Delhi.
Anshu wore a Tee and a ‘running sari’ designed by Nida Mahmood. The specialty about this custom outfit is that it is made of 100 per cent recycled plastic bottles, very comfortable and most importantly it is suitable for jogging, running and other physical activities.
The acclaimed designer Nida was happy with her creation on Anshu as it received rave reviews from the critics and the media alike. She had earlier designed clothes line for Priyanka Chopra, Soha Ali Khan, Kalki, Kajol and other Bollywood celebrities, all of whom had walked the ramps in her creative and innovative designs.
When asked how she felt being a celebrity show stopper in such a big fashion platform, Anshu said that she was happy and privileged to showcase and launch India’s first sportswear and athleisure collection which is fully organic and chemical free.
Deivee’s co-founder Darshan M stated that the active lifestyle brand’s sports fashion collection is inspired by the rich culture, color and textiles of the four different regions including North East India.
India Fashion Week 2017 was organized by the Fashion Design Council of India (FDCI) and was sponsored and promoted by Amazon and NEXA.
Other celebrities who walked the ramp along with Anshu included model actor Milind Soman, India’s plus size yoga teacher Dolly Singh and 101-year-old marathon runner Mata Man Kaur.