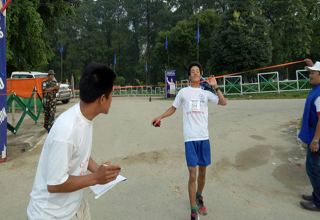 ITANAGAR, Oct 16: The All Arunachal Pradesh Students Union (AAPSU) on Monday organized the first Jarbom Gamlin Marathon Race for both men and women as part of its Golden Jubilee celebration.
Bamo Tawang won the race in men’s category. Karbu Kena and Kogum Potom finished in second and third positions respectively.
In women’s category, Shyamali Singh from West Bengal won the first position. The winner told the organizers that she had come all the way from West Bengal to participate in this event organized to mark the AAPSU’s Golden Jubilee Celebration.
In total, 450 runners, both men and women, participated in the race.
The event was flagged off by AAPSU President Hawa Bagang at RG Stadium, Naharlagun.
The race was held from RG Stadium (Naharlagun) to IG Park, Itanagar for men and Dree Ground for women participants.