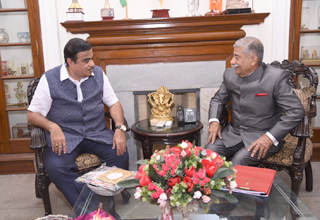 ITANAGAR, Oct 16: The Ministry of Road Transport & Highways (MoRTH) has committed to include balance packages of Itanagar-Banderdewa road in the annual plan of the Ministry for the year 2017-18. This was communicated to Governor Dr. B.D. Mishra on Monday by senior officials of MoRTH.
Earlier Governor Mishra had called on the Union Minister, Ministry of Road Transport & Highways, i Nitin Jairam Gadkari at New Delhi. In the meeting, the Union Minister suggested for using cost effective technologies in implementation of road projects in the State and need for checking pilferage of fund. He directed the Managing Director of NHIDC Ltd to meet the Governor for further discussion and coordination of the pending issues.
During the discussion with the Union Minister, the Governor submitted the issues related to the national highway projects in Arunachal Pradesh on priority. He highlighted major projects pending for approval from the ministry and for budgetary support including proposals such as balance packages of Itanagar-Banderdewa road.
Reflecting his concerns on the development of eastern part of the State, particularly in Tirap, Changlang and Longding Districts, the Governor submitted the issues of Khonsa-Hukanjuri road, Lalpul-Manmao-Changlang road, Khonsa-Tissa-Longding road and Margherita-Changlang Road for early implementation.
The Governor also mentioned about Akajan-Likabali-Bame road, Daporijo-Dollungmukh road via mebi-Geko and Tezu-Chapakhowa road and the 407 km Potin-Pangin road project, the foundation stone for which was laid by Gadkari on 30th April 2015 in his submission.
While referring the extensive damages to the existing road network of the State and portions of National Highways due to incessant monsoon rains in his submission, the Governor requested the Union Minister MoRTH for release of adequate Flood Damage Restoration fund.
As a follow up action to the meeting, the apex officers of Ministry of Road Transport & Highways called on the Governor at Arunachal House, New Delhi. They apprised the Governor of the projects and some issues including forest clearance and land acquisition.
The Governor advised Principal Chief Conservator of Forest to address the issues in respect to forest clearances for road construction as per rules and procedures within a time frame so that the economical importance roads can be constructed.