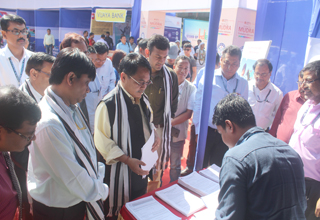 ITANAGAR, Oct 17: Mudra Promotion campaign along with financial inclusion and digital payment campaign was organised at the state Banquet Hall Itanagar with a view to highlight the Mudra loan as well as to facilitate various modes of digital payments and to create awareness on various financial inclusion schemes.
The Pradhan Mantri Mudra Yojana is introduced by the Government of India to meet the financing needs of non-corporate small business units of the country. The idea is to provide financial support for small business which employ majority of the Indian working population.
Minister, Agriculture, DoTCL, Trade & Commerce Wangki Lowang, who attended the programme, asked the bankers to encourage such genuine loan seekers and to bridge the communication gap between the banks and the loan seekers. He wished that progressive farmers could also be encouraged for such loans.
He further asked everyone to avail the benefit of the scheme and pass on the information regarding Mudra to the needy.
The minister felicitated some of the achievers of the Mudra loan.
Deputy Commissioner Itanagar-Capital Complex, Prince Dhawan termed the campaign a part of a wider programme for financial inclusion.
The DC said that the motive of the Mudra loan is to encourage young entrepreneurs who can contribute towards developing the society.
“Mudra loan is a collateral free loan that gives priority on merit basis,” he said.
Highlighting the importance of digital payment, the DC advised everyone to link their Aadhaar number with bank accounts. He further informed that very soon Akashdeep area would be made a wi-fi zone with the District Administration providing free wi-fi as well as biometric device so that payment could be done with the fingerprint, provided the account is seeded with Aadhaar.
He further informed that every shopkeeper as well as the registered vendors would be encouraged for cashless transaction using the BHIM application or the biometric device. However, the only condition is to have an account registered on GEM Portal, said the DC.
An interactive session was also held wherein Sudhir Shyam, Director, DFS, Ministry of Finance, Government of India answered the queries of people related to Mudra loans.
Prabhat Rajkhowa, Manager Lead Bank showed a film on Mudra loan and the success stories of many entrepreneurs who were benefited by the loan.
During the programme, the officials from banks also conducted a trial of the BHIM application.
Later, the minister inaugurated 28 stalls set up by various banks and other financial institutions for promoting the Mudra loan, financial inclusion schemes and digital payment solutions. (DIPRO)