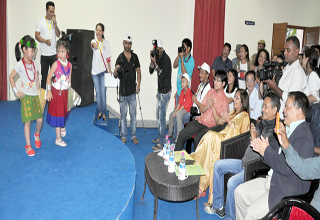 ITANAGAR, Oct 22: Neelam Mishra, wife of Governor B D Mishra, emphasised on ensuring proper means of communication for tourists and other interested people for sustainable tourism in Arunachal Pradesh.
She said this during the valedictory event for competition winners of the Tourism Children’s Festival held at the Science Centre, here at Itanagar on Sunday.
Attending the Tourism Children’s Festival, organised by the state Department of Tourism, Neelam highlighted the importance of tourism in the development of the state.
Impressed by the cultural programme presented by the children, particularly students of Donyi Polo Mission School for Hearing and Visually Impaired, Chimpu, Mishra said that she will be associating herself with the children of the school and the state.
Tourism Parliamentary Secretary, P D Sona informed that the Tourism Children’s Festival is part of the Prime Minister’s effort to popularize tourism by roping in children, who are one of the greatest motivators.
Secretary Tourism, Dr Joram Beda briefed on ‘Paryatan Parv’ which started on October 5 and will conclude on October 25 next.
A large number of children from different schools participated in the festival. Organised with the theme, ‘Dekho Apna Desh’ under ‘Paryatan Parv’, the day-long festival included storytelling, quiz, singing and drawing competitions, photography workshop, adventure tourism events, etc.
Gyan Ganga Vidyapeeth, Itanagar won the inter school quiz competition, while Alphabet Public School, Itanagar and Government Higher Secondary School, Itanagar won second and third prize. (PRO to Raj Bhavan)