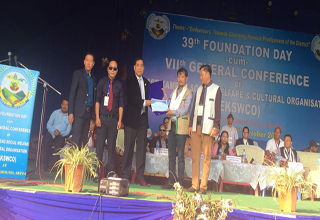 Staff Reporter
SEPPA, Oct 25: Confronted by various vexed issues prevalent in the district, the East Kameng Social Welfare Cultural Organisation (EKSWCO) has resolved to adopt major reformative policies, including monitoring major government projects in the district.
This was decided on the third day of EKSWCO’s 39th Foundation and 7th General Conference at General Ground in Seppa.
The EKSWCO resolution came after a heated debate over lapses and lack of quality of work in many projects. However, the resolution made it clear that the monitoring team would confine their monitoring within major projects from Rs 5 crore onwards.
Considering the social impact being caused by the 10 percent interest rate money-lending trend in the district, the EKSWCO denounced the interest rate of 10 percent and maintained that interest loan system shall be limited to five percent or below.
On social audit performance of legislators of the district, the EKSWCO arrived at a resolution that there would be debate and discussion over the performance report in every general conference of EKSWCO.
Giving a presentation on the revenge killing system, senior Advocate Pritam Taffo strongly denounced the system. The Organisation resolved to keep faith on the strength and purpose of the law and continue its effort to reform the society.
On the misuse of print/ electronic and social media, the EKSWCO pledged to initiate a sensitization programme to create awareness among the people about right usage of media. It also denounced the involvement of money culture and mortgage during elections and resolved to discourage the culture.
The organisation also pledged to work as active catalysts alongside the government and NGOs to root out domestic violence from the district.
Raising concerns over rise of domestic violence cases reflected in a PowerPoint presentation by PhD Scholar Subi Taba, former Deputy Chief Minister Kameng Dolo called for total abolition of polygamy.
Earlier, a memento and certificate were presented to the EKSWCO team for outstanding contribution and promotion of Swachh Bharat Mission (Gramin) by Parliamentary Secretary Tapuk Taku on behalf of the state government during the function.