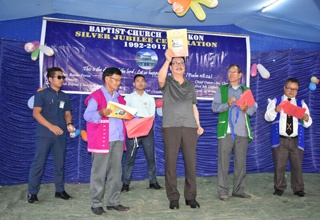 NAMSAI, Oct 25: Deputy Chief Minister Chowna Mein cleared the air about the apprehensions regarding the proposed Department of Indigenous Faith and Cultural Affairs (DIFCA) and informed that it has been rectified by omitting the word ‘faith’.
Stating that the government was a secular one, he said that the department would take care of the welfare and development of all indigenous cultures irrespective of faith and beliefs.
Attending the silver jubilee celebration of Nungkon Baptist Church under Lekang circle on Wednesday, Mein asked everyone not to be threatened by the establishment of the department and instead create an environment of harmonious co-existence
The church was established in 1992 and is affiliated to the Dibang Lohit Baptist Churches Association (DLBCA).
Addressing the gathering, Mein recalled his long association with the Christian community during his student life. He was of the view that society’s legacy must be carried forward for posterity and the young generation should shoulder the responsibility.
The DCM also released a souvenir on the occasion.