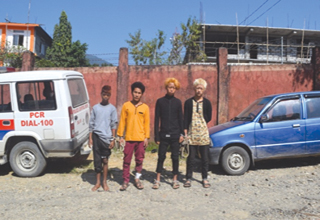 [ Karda Natam ]
ITANAGAR, Oct 28: In a major breakthrough, the Capital unit police, with the help of the Sagalee unit police busted a gang of motorbike lifters in Sagalee on Friday and recovered two scooters and one motorbike from their possession.
Alleged culprits, Sande Singhi (24) Takar Gyadi (20) James Tawe alias Shankar (20) and John alias Hawa Pardung (19) were arrested in connection with the theft.
Acting on a tip off, police alerted every police check gate within the Capital Complex and all police stations in adjoining areas
The four alleged culprits were arrested from Sagalee and have been remanded at the Itanagar Police Station at present.
After receiving numerous complaints of thefts, the Itanagar unit police under Investigation Officer SI, S Singh and his team swung into action, and with the help of SI Kipa Kaha of Sagalee unit police managed to arrest the alleged culprits and recover the stolen two-wheeler vehicles.
However, it is reported that two other culprits managed to abscond from the scene and the police were able to arrest four of the six alleged accused.
Further interrogation and investigation are on to solve other cases of bike and scooter theft reported within the Capital Complex and to nab the absconding accused, informed SI Singh.