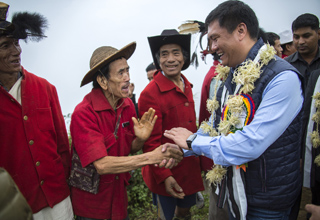 TALI, Oct 30: Chief Minister Pema Khandu’s visit to Tali ADC headquarters in Kra Daadi district has not been taken kindly by the People’s Party of Arunachal. The Chief Minister addressed a BJP Maha Rally cum development meeting where he assured restart the work on the existing incomplete Yangte-Tali road by November this year.
The PPA said that wasteful show of strength was to undermine the democratically elected leader of 20 Tali Assembly Constituency Markio Tado.
“We are surprised to see that the Pema-led Government is trying to undermine and humiliate a popularly elected sitting MLA just because the legislator belongs to the PPA”, President of the PPA, Kahfa Bengia said.
Meanwhile, the Chief Minister said that a meeting involving the Finance, Planning and PWD departments will be called in the first week of November to plan for construction of Yangte-Tali road – following which a new scheme and the head will be decided for fresh execution of the work.
Pema also informed that Rs 5 crore is sanctioned for bridge over Kumey River connecting Yangte and Tali, while expressing optimism that work for 10-12km of road from bridge point to Tali headquarters should complete soon as the terrain is favourable.
The Chief Minister informed that the existing road was sanctioned during former CM late Dorjee Khandu. But 12 years after the work was sanctioned, which is the only lifeline for the people of Tali and Pipsorang circle, it failed to complete following scheme duplicity and poor implementation.
Pema said that though in the past several CMs have visited the Tali headquarters, the absence of road connectivity had always remained the biggest issue and is the lone constituency in the state to face so. He said it was during late Dorjee Khandu that Tamen-Tali and Chetam-Pipsorang road was also sanctioned.
The Chief Minister proposed to execute the work for Yangte-Tali road under the Deputy Commissioner with a strong monitoring team.
“If your wish for roads has to be real then you have to agree to my proposal, else the road is never going to complete on time,” said Pema in his appeal to the people.
He further fervently appealed to the people to bring change in their thoughts first before expecting any change from above
. “The story will be the same – Chief Ministers will come, make announcements and go; but nothing will change on the ground. So I don’t want it that way,” he said.
He also appealed to the people from the constituency settled in the state capital to invest in their hometowns and villages for upliftment of their area. He said true development is when villages become self-contained and economically viable and not when villagers are forced to migrate to cities in search of better avenues.
The Chief Minister in his advice to party workers who have joined from PPA, said that once in the BJP, they should be ready to serve in any place or under any posts while keeping in mind that its nation’s interest first, party and then self-interest last.
He said if the party commands tomorrow to him to leave the Chief Minister’s post and serve elsewhere, he would be ready to do so. Such should be the commitment of the party member, the Chief Minister said.
Pema said the government will keep no discrimination towards ruling or opposition legislative members. He said the opposition PPA and Congress members too are part of the ‘Team Arunachal’ and welcomed them for their participation through questions and resolutions.
“Stronger the opposition, better will be the performance of the ruling government, he opined.
Earlier Union Minister for Home Affairs Kiren Rijiju, Gao and Home Parliamentary Secretary Pani Taram also spoke.