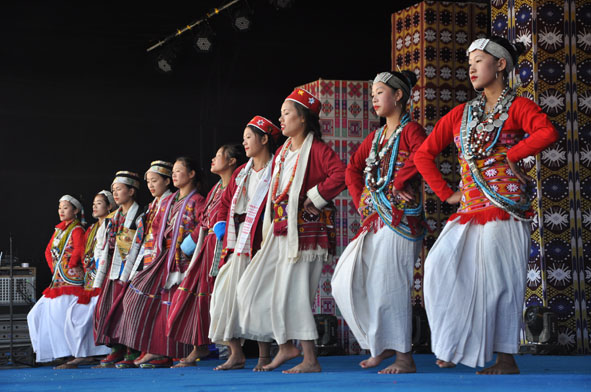 BOMDILA, Nov 4: “We are with the people of Arunachal Pradesh and I stand here first as a citizen of the nation and then as the Defence Minister, said Union Defence Minister, Nirmala Sitharaman during the inaugural function of the second edition of the three-day Buddha Mahotsava, 2017 at the Buddha Stadium in West Kameng district on Saturday.
Emphasizing on peace for development, she said peace is of utmost importance and the centre would respond to any need of the state and its border areas.
Referring to the unfortunate 1962 War, the Defence Minister also spoke highly of the people for being the real sentinels in guarding the frontiers and securing the border of the country.
Seemingly charmed with the traditional attire of the indigenous tribes of the district, Sitharaman also appreciated the people for living harmoniously with nature and prioritizing peace as the stepping stone for development. She also called for preservation of rich culture and tradition of six tribes of the district, namely Monpa, Sartang, Shertukpen, Aka ( Hrusso ) Sajolang (Miji ) and Bugun in its pristine form.
Earlier, Minister of State for Home Affairs, Kiren Rijiju calling upon the people to work for the development of the area, said that he would be more than happy to facilitate further development in the area and the state as a whole.
Local legislator and Advisor to CM, Japu Deru and Deputy Commissioner Sonal Swaroop also addressed the mammoth gathering.
Among others, Defence Secretary Sanjay Mitra, DGDE J Sharma, Joint Secretary (Works) Manish Thakur, ADG, LW& E, Resident Commissioner Delhi, Gitanjali Gupta, parliamentary secretaries Phurpa Tsering and Kumsi Sidisow, and GOC 5-Mtn Division attended the inaugural function.
The second edition of Buddha Mohatsava is being organized by the West Kameng district administration. (DIPRO)