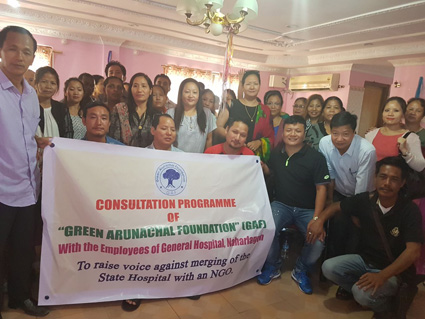 ITANAGAR, Nov 6: Members of the Tomo Riba State Hospital Employees Association (TRSHEA) claimed that they have been asked by the authorities to decide whether they are willing or unwilling to join the Tomo Riba Institute of Health and Medical Sciences (TRIHMS) within a short notice of seven days, following with they have decided to stage a protest during the visit of officials from the Medical Association of India in the last week of November.
“We are being threatened of deputation to remote corners if we decide against it. We have been serving in this state hospital for the last many years”, the association members further claimed.
This was informed by the Green Arunachal Foundation (GAF) in a communique copy on Monday, who held a consultative meeting earlier in the day with the TRSHEA members at Naharlagun to discuss the impending apprehensions caused by the state government’s decision to hand over the state hospital to a private enterprise.
Members of TRSHEA reportedly felt that the authorities were taking advantage of the situation. They said that TRIHMS in private hands may prove beneficial, but they were not given enough time and information to properly understand the entire process. They expressed that they were also worried about promotions and benefits after pension under a private establishment.
TRSHEA said that if at all the government wants to exchange hands, let the hospital be run by the central government in the AIIMS model.
The TRSHEA further informed that from now itself the charges in the medical have shot up. The charge for a pay cabin has shot up to Rs 1500 per day with a security deposit of Rs 10,000.
“One can well imagine how much it would cost once the hospital is fully run by a private body”, the GAF quoted the Association as saying.
“It is doubted that the whole process is being carried out for individual benefits. We cannot merge with the new Society without properly understanding its programmes. The authorities are also not showing us any recruitment rules”, TRSHEA executive members rued, adding that it is surprising that even the director of the hospital, Dr Moji Jini says that he has no clear idea of the whole thing.
“Rather than giving advertisement for more than 400 new posts, the Society should have taken care of the existing 382 staffs. Induction of such a large number of posts is certainly going to affect our services”, the Association feared.
During the meeting between the GAF and TRSHEA, it was decided that the Association would fight against handing over the state hospital to private hands with the support of students’ bodies and civil societies in particular and the public in general.
While welcoming the decision of establishing a medical college, it was agreed that the hospital should remain a government establishment and should not be affiliated to any private medical college.
Among others, the meeting was attended by GAF Chairman Takam Tatung and student leaders, including Assistant General Secretary of ANSU, Charu Okam.