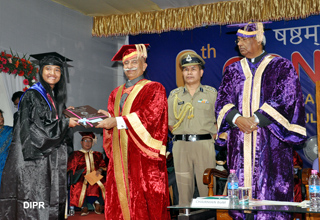 ITANAGAR, Nov 10: While attending the 6th Convocation of the North Eastern Regional Institute of Science and Technology (NERIST) in Nirjuli, Governor of Arunachal Pradesh Dr BD Mishra on Friday called upon the graduates to contribute towards the development of state and the nation.
Congratulating the students who were awarded degrees, the Governor emphasised that the passing out students must strive to develop the scientific temper, humanism and the spirit of inquiry and reform in them and also protect and improve the natural environment including forests, lakes, rivers and wild life, and to have compassion for living creatures as enshrined in the Constitution. To remind the graduating students of their fundamental duties enshrined in the Indian Constitution, at the advice of the Governor, the printed copies of fundamental duties were given to the students along with their degrees, which has presumably been done for the first time ever in any convocation in any university.
The Governor was highly impressed to see large number of girl students amongst the recipients of PH.D Degree and he offered his felicitation to them.
The Governor, who is also the President, NERIST Society called upon the members of the faculty to be coach, friend, philosopher and guide to the students. He emphasised on creating learning atmosphere through a holistic academic management. He suggested for two classes a week by the Director to built stronger bond between the students and the faculty, while informing that he himself will conduct interactive sessions with students once in a fortnight.
Advising the continuing students, the Governor said that they must set their goal, work hard and earn knowledge. He also emphasised on games and sports and extracurricular activities along with academic courses for the students.
The Chairman, Board of Management, NERIST, Prof. U.C. Ray and the Director, NERIST, Prof. Tamo Mibang, Vice Chancellor, Rajiv Gandhi University also spoke on the occasion.
Earlier, the Governor presented the Gold Medals to 50 students for securing highest Cumulative Grade Point Average (CGPA) for academic session of 2015-16 and 2016-17. 37 students received Ph.D degree and 412 out of 1086 students received their degrees in person on the occasion. (PRO, Raj Bhawan)