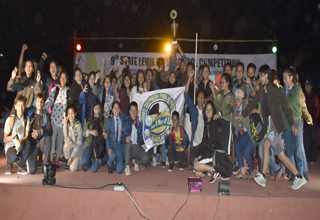 ITANAGAR, Nov 13: The two days literary, cultural and sporting extravaganza “Talent Search” organized by All Arunachal Private Schools’ Association in collaboration with Sahodaya came to a close with the announcement of winners and distribution of prizes, medals and certificates.
The Shepherians were declared the overall champions of the Talent Search- 2017 and Model English School claimed the runners’ up trophy.
In Group I, Little Star School became the champions and in Group II, Model English School lifted the trophy. In Group III, Good Shephered Public School finished atop the score board.
Speaking at the valedictory function, Rajesh Singh, President Lion’s Club, Dibrugarh, appreciated the efforts of all the Principals and office bearers of AAPSA and Sahodaya for taking up the challenging task and exhorted the students to reciprocate such initiatives through self-discipline and hard work.
He also commended the students for well-choreographed dances and said, “from the quality of the dances performed I can easily guess the way the rest of the events of Talent Search have gone”.
Earlier, Levi E. Katy, Principal Donyi Polo Vidya Bhavan, who is also the Secretary of AAPSA and Chairman of Organizing Committee of AAPSA-Sahodaya Taent Search 2017, underscored the fact that participation to Talent Search reached almost a thousand this year and the participants showed professional competence.
The valedictory function was attended by a large number of students, parents and well-wishers of AAPSA.