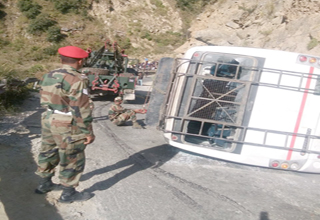 BOMDILA, Nov 14: One passenger was killed on the spot when an APSTS night super bus bearing registration number AR X 0469 headed towards Tezpur from Tawang rolled over while negotiating a sharp turn and steep slope at Rupamor; 16 kilometers from district headquarters of Bomdila at 7.30 AM.
The dead has been identified as Madan Thapa, aged 42 years, working as Chowkidar in the Department of PHE & WS at Bomdila.
Two others who sustained grievous injuries were rushed to the nearby army hospital but were later referred to a civil hospital in Tezpur. Eight passengers also received minor injuries and were given medical care at the army hospital in Rupa.
Meanwhile, break failure has been cited as the apparent reason for the accident by the police.
A total of 40 passengers, including the driver and the cleaner were travelling to Tezpur when the accident occurred.
The Rupa unit police, led by ASI Tashi Monpa and army personnel immediately responded to the crisis and evacuated the passengers to safety. (DIPRO)