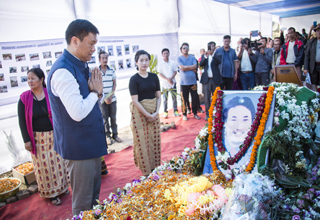 KIMIN, Nov 20: The family members of former MLA, Ngurang Pinch on Monday appealed to the people to refrain from uploading inappropriate images of the late leader in social media.
“We would appreciate some privacy and respect at this grave hour”, the family appealed in a press communiqué.
They also informed that an FIR has been lodged and outcome of the case is awaited.
“The death has come as a huge shock to the family and the society and we have certain clarifications to make. Social media has announced the cause of death as drowning without any proof. We are awaiting result of FIR”, the family said.
They have also intimated the Chief Minister and the MoS Home about it and are positive that the truth will be uncovered.
Further, the Bharatiya Janata Party Kurung Kumey district unit has unanimously resolved to urge the state government to conduct CBI or SIT inquiry into the death of the former MLA.
This resolution was adopted following a meeting of the executive members of BJP KK unit, where the members also paid glowing tribute to late Pinch, who held charge of the district unit.
Meanwhile, the mortal remains of former MLA Ngurang Pinch were laid to rest here on Monday.
The former Doimukh MLA died in a tragic accident on Saturday.
Chief Minister Pema Khandu, Deputy Chief Minister Chowna Mein, Union Minister Kiren Rijiju and state BJP President Tapir Gao attended the funeral and offered floral tributes to late Pinch at his private residence here.
The Chief Minister also met the family members and offered them condolences.
He said that Pinch was not only a leader, who always had a strong vision for development of the state, but also a loving and caring father.
Recalling his association with Pinch as Chairman of Arunachal Pradesh Agriculture Marketing Board, Pema said that Pinch had shown keen interest to take forward the Board and contribute for the development of the state.
“The state government will carry forward the visions and plans Ngurang had for the Agriculture Marketing Board”, he added.
The entire family of Rajiv Gandhi University (RGU) deeply mourned the untimely demise of the former MLA and observed two minutes silence as a mark of respect to the departed soul.
While expressing shock at the tragedy, the Registrar remembered Pinch as a well-wisher and friend of the University, eminent social worker and very good human being, who rendered valuable service to the people of the state in various capacities.
“He will be remembered as a social worker than a politician. The first bus waiting shed near main auditorium of the university was donated by him”, the Registrar said.
The University remained closed for the day as a mark of respect and remembrance to Pinch.
The Sports fraternity of Arunachal Pradesh also deeply mourned the death of Pinch, who was the founder chairman of Sports Authority of Arunachal (formerly Sports & Youth Development Board).
The officials and employees of Sports Authority of Arunachal (SSA), led by its Chairman Bamang Tago observed two minutes silence as a mark of respect to the departed soul.
In a condolence message, Tago conveyed heartfelt condolence to the bereaved family members.