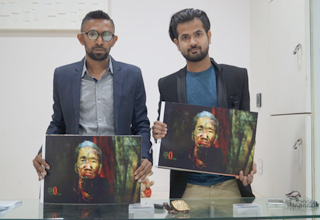 ITANAGAR, Nov 20: Surat based filmmaker, Mitra Patel has recently launched the photo book of his upcoming documentary, titled ‘Ziro: The Lost Tribe’, in an event held at the Surat ITC in Gujarat.
His documentary explores one of the most modernised yet ignored tribes in India. The documentary unfolds the culture which is as complex as amazing it is. It tries to show the modernized yet culturally rooted youngsters in one of the most beautiful valleys in the country, with layered paddy fields, surrounded by a ring of deep green forests and towering jagged eastern Himalayas.
While working as a photographer in the fashion and film industry, Patel was mesmerized by the organic yet developed nature of the inhabitants of Ziro during his visit to the Ziro Festival of Music. This sparked his desire to capture the life and culture of the native tribe of Ziro.
“The shoot was as challenging as it was fulfilling. We had to encounter varying hurdles such as halting in our ways due to the landscapes. While most of the people were cooperative in our endeavours, certain elders displayed a shy reluctance during interviews” Patel said during the launch event.
Pratap Harode, who worked as a creative producer and a screenplay writer for this film said, “We invite you to both experience and be immersed in the magical world of Ziro and to support our independent film which is a pure cinematic attempt and dedicated to bring Ziro into the limelight.”